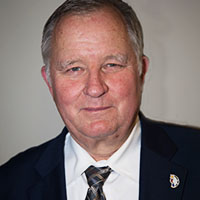 The California cyber education community lost a dedicated and passionate cybersecurity education advocate with the passing of Col. Harry Talbot on January 30. He will be remembered as one of CyberPatriot’s greatest advocates and someone who consistently went above and beyond to help students succeed.

Talbot also served as an Administrative Coordinator with the Beyond the Bell program in the LAUSD. That position included oversight of more than 600 schools offering grant-funded before and after-school programs.

He facilitated the acquisition of federal, state, and private grants for more than 100,000 students in those programs on a daily basis and contributed much of his own time on evenings and weekends to ensure that those efforts were successful.

LAUSD CyberPatriot Coach Carey Peck worked closely with Talbot and said he possessed a combination of big-picture vision and the attention to detail to make his ideas come to life.

“He was a terrific innovator who pushed a lot of programs into a high a degree of achievement and was very eager to start new programs as well,” Peck said. “He had a great organizational mind and didn’t forget anything.”

Some of those programs Talbot helped build and execute include Beyond the Bell Cup, a competition held at the end of each CyberPatriot season, and the California Cyber Innovation Challenge, a statewide cyber competition sponsored by the Governor’s Go-Biz Office.

California Cyberhub Community Manager Donna Woods worked closely with Talbot on CyberPatriot and other initiatives. She recalled his spirit and unparalleled support for cybersecurity education.

“Harry's military ‘no retreat attitude, and diligence in upholding the Air Force creed and vision including "cyberspace global vigilance, fueled by innovation, shared values, and key capabilities" was evident in the exemplary work ethic, dedication, and vision for Beyond the Bell’s participation in CyberPatriot,” Woods said. “I will be forever grateful for the lessons learned from Harry, and for the foundational principles and high expectations he created for CyberPatriot teams throughout California.”

Peck said Talbot also took a personal interest in his students, mentoring them and often sponsoring them out of his own pocket if school funds were not available.

“He was constantly trying to help people and constantly adopted people who were starting their careers. He was an amazing and selfless mentor.” Peck said.

Erle Hall, Educational Programs Consultant in the California Department of Education, met Talbot in 2010 as part of his work to spread cybersecurity awareness to students. The relationship grew over the years and Hall invited Talbot to be a panelist at the Educating for Careers Conference last March.

Hall said the two bonded over their military service and their passion for cybersecurity education.

“Over these last several years we collaborated on career education and shared thoughts on our lives as ex-servicemen, he in the Air Force and I in the Army, and how that sense of service to country and community remained with us and informed our sense of mission in our work,” Hall said. “It was a shock for me to hear of his passing and I will miss him as a friend and colleague. His legacy will be carried among the many students’ memories of him as he inspired and connected them to the exciting world of cyber security education and competition.”

Talbot joined the U.S. Army in 1970 and retired from the U.S. Air Force Reserve in 2004. He received a Bachelor of Arts in Political Science from San Jose State University, a Master of Arts in Public Policy from the Claremont Graduate School, and a Doctor of Education from California Lutheran University.

Outside of his service to the LAUSD and CyberPatriot, Talbot served as Associate Director of the United Way of Kern County and Santa Barbara County. He is survived by his brother Tom Talbot, a sister-in-law, a niece and a nephew in Texas.