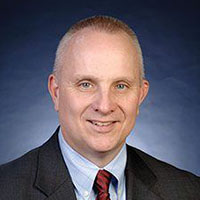 2016 Government Leadership of the Year

Rodney Petersen is the director of the National Initiative for Cybersecurity Education (NICE) at the National Institute of Standards and Technology (NIST). He previously served as the Managing Director of the EDUCAUSE Washington Office and a Senior Government Relations Officer.

He founded and directed the EDUCAUSE Cybersecurity Initiative and was the lead staff liaison for the Higher Education Information Security Council. Prior to joining EDUCAUSE, he worked at two different times for the University of Maryland - first as Campus Compliance Officer in the Office of the President and later as the Director of IT Policy and Planning in the Office of the Vice President and Chief Information Officer. He also completed one year of federal service as an Instructor in the Academy for Community Service for AmeriCorps' National Civilian Community Corps. He is the co-editor of a book entitled Computer and Network Security in Higher Education. He received his law degree from Wake Forest University and bachelors degrees in political science and business administration from Alma College. He was awarded a certificate as an Advanced Graduate Specialist in Education Policy, Planning, and Administration from the University of Maryland.