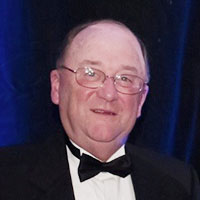 He is an industry veteran with 50 years of experience in information security/information assurance. Of that, 38 years were in the federal government. Mr. Jacobs had a long and distinguished career at the National Security Agency where he served in key management positions in both the Intelligence and IA mission areas. He served as the Deputy Associate Director for Operations, Military Support where he was responsible for developing a single and coherent military support strategy for NSA. During his tenure at NSA, Mr. Jacobs was a leader in Information Systems Security production and control, policy and doctrine, education and training, and customer relations.

He has testified before Congress on defense issues and has spoken widely on topics ranging from IA to cultural diversity. For his vision, dedication, and accomplishments, he has been recognized by the Department of Defense with the Distinguished Civilian Service Medal; by the Director Central Intelligence with the Intelligence Community's Distinguished Service Award; and by NSA with the Exceptional Civilian Service Award. In addition, he has been awarded the National Intelligence Medal of Achievement and was twice awarded the Presidential Rank Award for Meritorious Achievement. He received a B.S. degree in Business Administration from King's College and completed the Senior Managers in Government Program at Harvard University's Kennedy School.